Those of us with some age end up making more and more trips that are not just for fun but combine the joy of travel with the need to see old friends(or is that friends that are old) and having surgery or are sick.  I enjoy seeing my friends but to some extent the visit is a precursor to what I will probably be experiencing in the not to distant future.  So it is with the thought of seeing my friends, one out of surgery and the other very sick in Asheville that I planned a loop up to Pineola, NC then to Asheville, NC making these stops.  But let's not grind out the trip in a car......this calls for a road trip!

I left Cary, NC with the plan to travel non-interstate roads to Lenoir, NC then take Rt. 90 up to Linville/Pineola on a route that should have provided good fall colors and an interesting road through the forest.  I took Rt. 64 all the way into Lenoir through various old NC cities that had to some extent fallen on hard times.  It seems to be the same story all over NC, the youth of today want to be in the big cities, not the small towns.  I saw a lot of boarded up stores in these towns but the route was interesting since I wasn't in a hurry.

In Lenior I took Rt. 90, a small winding paved 2 lane for about 5 miles, very winding then it suddenly turned to gravel.  I had expected the gravel but the start of it was gnarly with sizable rocks in the middle.  Of course, I am on the R12000 GSA with Anakee 3 tires for the road.  It was evident that I should have been on the G650 with TKC70's to better handle the road.  But other than having to constantly pay attention to the rear of the bike trying to slide off the crown of the road towards the ditch the bike handled this part of the road really well.  Little to no traffic with a number of trees down that had pieces carved out for the passage of cars and bikes.  This is really a single lane road so I paid attention to the dust clouds coming in my direction.  The drivers coming down were courteous and slowed to a crawl to let me get by so there were no close calls.  After about 10 miles of this I came upon a little cabin and campground with a crowd on the porch enjoying the beautiful day. 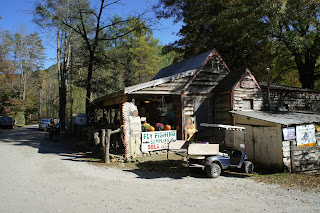 I think it was called Bruce's and they were having a good time.  Seems I missed the annual Oyster/Shrimp roast and party the day before.  They are known for the tasty hotdogs and beverages.  This stop has been mentioned to me by everyone that I told about my road trip.  All motorcyclists.  I have noted in my calendar that I should plan on this next year.


So I took a break and checked my bags to make sure that they were secure.  I was running a bit behind my planned arrival time so I left.  Another 10 miles of gravel with more trees down and now numerous trucks off on the side of the road.  Seems it is bear hunting season.  But the scenery was beautiful and by now I had adjusted to the gravel on road tires. 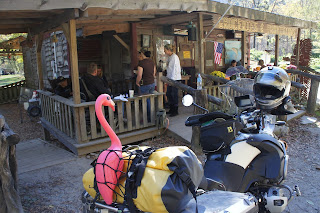 I wished I had mounted my helmet cam for some videos but the road up toward Grandfather Man was dusty and I was looking up into the sun most of the time.  Next time I will leave from Lenoir in the morning and get some good pics of the road.  Anyway, my remaining trip up to Pineola was uneventful.

I spent 3 days and 2 nights visiting my college roommate and his wife sitting on the side of the mountain with a beautiful view. 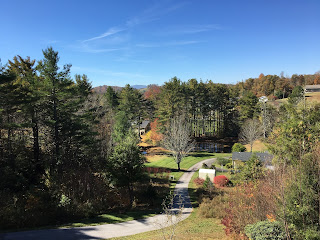 I had missed the colors by 3 days and the wind had blown all the leaves off that Friday.  After 2 days I call my next stop and found out that due to his health he would be unable to see me and so I planned by route back home.  I took Rt. 181 to Morganton which was a gorgeous twisty road with stunning views of the mountains around.  I had to make a stop at the Brown Mountain overlook. 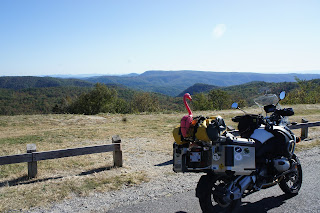 So Oswald and I headed home on the remaining of Rt. 181 then I-40 east until we got to Mocksville and returned home on Rt. 64.  Still a beautiful trip this time of year!  I will make another trip up to Asheville this fall!