Left Rapid City around 11:00 due to continual rain all night but the winds came in and dried out everything quickly.  50 degrees and one heck of a breeze.  Took 16 out of Rapid City to 16A around Rushmore but the high winds and fog caused me to pass by with a few picture moments and move on to Crazy Horse some 17 miles down the road. 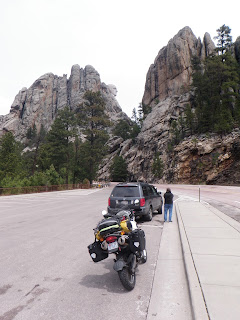 ugh, don't know how to fix that but the road was really twisty and beautiful.  I took some video but can't download it now and I will do that when I get back.  Crazy Horse was worth a stop to I spent an hour browsing and watching the movie. 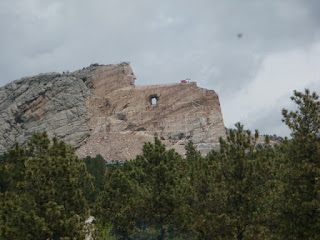 Crazy horse is 200 years from completion but it is going to be huge!  The museum was wonderful and I really want to go back and spend a day.

I left there around 2:00 and travelled back on 16 to Rapid City and my GPS told me to take SD 44 to get to The Bad Lands.  I didn't know or check but SD 44 takes a gradual SE route and you enter the Bad Lands scenic highway 240 from the southern end ending up on I-90 in Wall.  I had hoped to go south and end up in Nebraska so a little change.  The Bad Lands were beautiful. 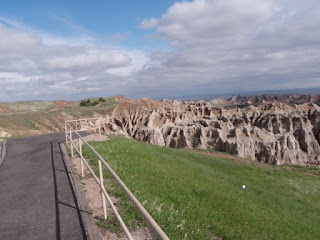 The park is a definite see if you can get here.  I was warned by the ranger that many of the roads in the park are dirt and they have had flooding and some are impassable.  Where have I heard this before. So ending up in Wall was not bad and I will make time on I-90 tomorrow before I turn south to NE.