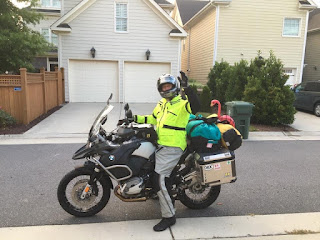 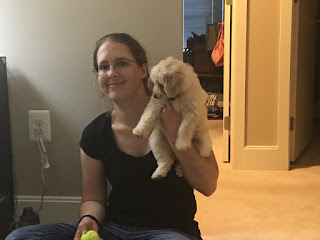 It seems like a number of my trips have been cancelled due to heat or rain but we are off! We are  heading for the BMW MOA RALLY in Hamburg, NY.  That is near Buffalo so the weather should be windy but cool and nights in the 60's so the camping would be great.  I left Cary deciding to bypass I-85 & I-95 in favor of Rt. 15 through the countryside of VA heading to Reston to have lunch with my daughter Megan and her new Puppy, Bailey!  It was a very easy ride on mostly 2 lane roads with a scenic countryside view.  As I approached the Washington area it was clear that traffic was picking up.
We had a great lunch at a local Pasta place and I stayed for a couple of hours to do some minor maintenance and play with the little puppy!  It is great seeing a little puppy.  I love dogs!  But the visit had to come to an end since I needed to get another 150 miles down the road so my Wednesday miles would make for a leisurely ride into Hamburg.  I decided to get on down the road and cross over into PA from MD and find a motel to sleep.  Wow, I lucked out.  I stopped at a Best Western in PA and asked of the cheapest room that they had(you know the cheapest thing on a BMW Motorcycle is the rider!) and the lady said she would give me the room for free!  What a deal.  Guess I had the points! So after a good nights sleep I repacked the bike and Oswald I and were off to the Rally.  We took Rt. 219 through the countryside of PA and into NY.  It is a winding 2-lane road through beautiful countryside seeing many very small towns that have a mill in the middle that employees the people in the valley.  Very pretty ride and reasonable comfortable with temperatures in the 80's.  I was making good time and arrived at the Rally around 3:00 and was told where the chartered club camping sights were staked out. 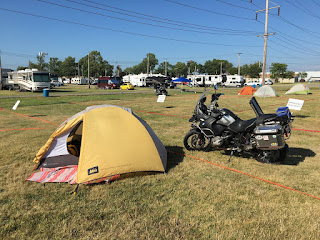 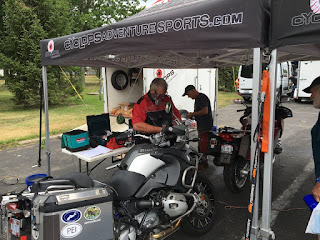 I was at the Rally a day early and there was a steady stream of arrivals as I put up my tent!  By Wednesday morning the campground was packed!  But first I had to endure a whale of a storm in the middle of the night.  The wind was so strong that it blew an 850 lb bike over on the owners tent and dropped a part of a tree on a sleeping camper so EMS had to make an appearance.  But the good news was all were ok and back at the Rally the next morning.  For the peak 1 hour period of the storm I lay in my tent with the tent collapsed on me and when the winds calmed down the tent popped back up!  No rain leaks and some minor damage to the tent so I guess I will need a new rain fly before my next trip.  I was excited for the next morning because I had made up my mind to add new LED accessory lights and headlights for better visibility but the vendors area was trashed by the storm and six hours later I had my lights installed!I   I will add a number of pictures around the campsite.  The organizers did a great job with good live entertainment overnight and a good beer tent.  Sorry, due to dust I didn't take many pictures of the GS Giants obstacle course. 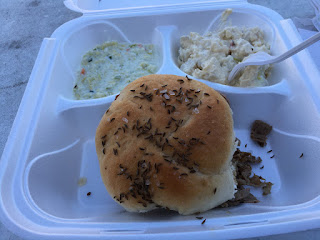 This was a local dish called Beef on Weck!  It was very good!
The food was provided by the State Fair Grounds Midway!  Not healthy but very good food! 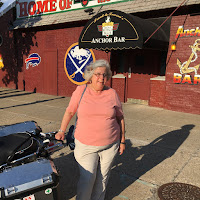 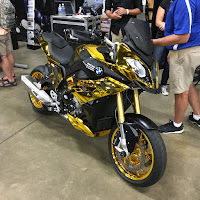 I went into Buffalo to visit old friends.  One night I stayed with Dan Boscarino and the other night I had dinner at the Anchor Bar with a dear friend Suanne Pasquarella, great time catching up! 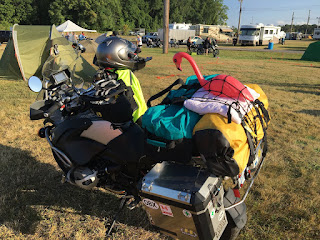 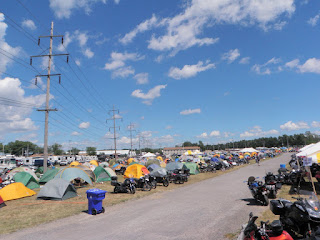 Well, A great time and 6,500 people mostly camping had to pack up and go home.  So three of us, Ray Hunting, Tom Steves and I headed out to make a 630 mile trip into 1000 miles!  We left around 8:00 Sunday morning and took Rt. 219 down into PA where we decided to see the Flight 93 Memorial.  Very moving and brought up a lot of sad memories in NYC. 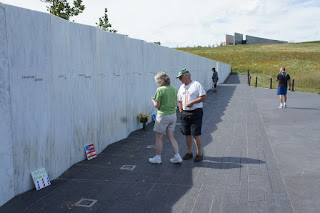 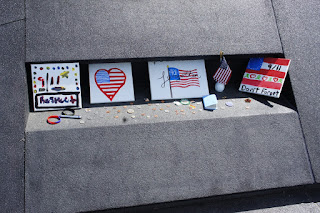 We then proceeded to get ourselves lost in PA!  OK someone flip a coin. 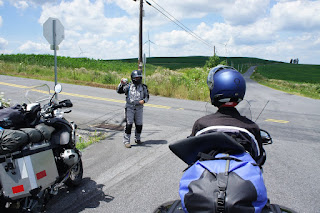 t  It was hot and we were all taking a close look at each other at the stops to make sure everyone was ok.  We got to Chambersburg, MD and Ray looks at me and announced "Your Done, we stay here!" 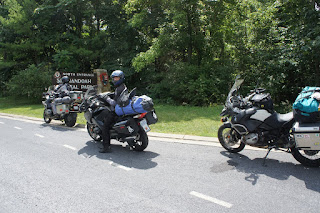 Monday morning came and we were off to Front Royal to ride the Skyline Drive through VA and it was in the 90's.  We stopped in Front Royal to pick up sandwiches and drinks for a picnic on the parkway.  Within 4 miles of getting on the Drive the temperature dropped to 75!  I was thinking of staying. But on we went.  Found a nice picnic area and while having lunch we noticed a shining spot on Tom's wheel.  The three of us all got down and examined it to find 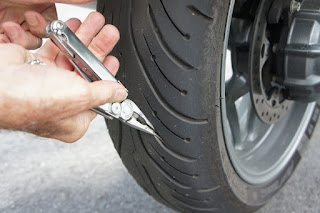 A nail!  So gritting our teeth Tom pulled it and no air came out.  Whew!

Close one!  We then decided to get of the Drive and head home, not knowing if the tire would hold.  We came down in Charlottesville, VA and the temperature quickly rose to 99 degrees so it was a sweaty ride home.  But what a great time!  Six days and a lot of miles with good friends