Well, you just have to get back on the horse!  At least that is what they say.  I planned a trip to Meadows of Dan, VA camping for a couple of days just to check out everything.  I knew I wasn't going to AK now so the alternate plan is to go camping and see how I feel on the bike and in the tent. After that if all goes well it is off to the BMW RA Rally in Petoskey, MI up near the Canadian border, 1000 miles from my home.

Wednesday was clear and while hot in the high 80 low 90's I knew that as I climbed up the mountain to VA that the temperature and humidity would drop.  Traffic is always hectic in the Greensboro to Winston-Salem corridor and I keep telling myself to take the back roads, so I did.  I took rt. 64 came into Greensboro from the south avoiding all the major highways.  I then went straight north and didn't get near Winston.  The roads were clear with light construction delays.  It was 90 as I approached Pilot Mountain and from there it declined steadily.  Once in VA the road west if Rt. 58 and is a beautiful winding road that climbs quickly into the mountains. 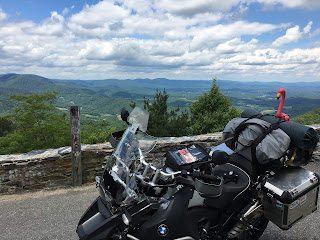 The Meadows of Dan is a very small town with a few B&B's and a number of camp grounds.  I was staying at the Willville Motorcycle Campground, within walking distance of some restaurants.  The atmosphere there is very friendly and I quickly met Will and he showed me around.  It is almost an honor system.  You pick up an envelop, fill out minimal information and deposit in a box with your cash.  There are many campsites, a bunkhouse if you don't mind sharing and a cottage that can be rented.  The shower/bathroom facilities are clean with very good hot water.  Mornings start with a gathering on the porch for coffee and the usual discussion of routes.  People are usually gone all day and around 5 pm people start rolling in for meeting up with people for dinner or preparing for the nightly fire pit.  Obviously,  beer, wine and other are easily found.  A little rain that night made sleeping that much enjoyable but cleared by morning. 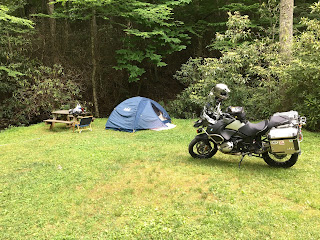 I spent the day riding the Blue Ridge Parkway, first north until I hit pea soup fog just north of Mabry Mill, the most photographed location on the BRP. 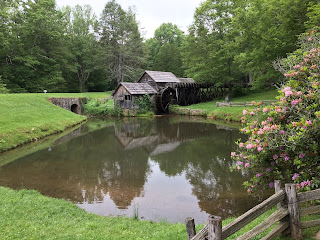 I then traveled south to the Parkway Music center to see the history of the Banjo and Fiddle in America.  There was live music playing all day and after riding some I had lunch at a deli just off of the parkway.  Again the weather was cool and very nice for riding.  I returned a little early to wait from my friend Ray to come in.  He was late and we heard that a man was killed in town on a motorcycle a little earlier.  Then I got a text that he was late due to problems with directions.  A note about Ray......he has 2 girlfriend on the bike, the cellphone and the GPS.  He programs both and listens to there differing directions which adds to the confusion.  It can be maddening when following him.  He arrived late and decided rather than pitch a tent he would stay in the bunkhouse.

We were up early and off to breakfast then we planned to ride over to Marion, Va to ride the "Back of the Dragon"  A beautiful winding road to Tazewell that takes you over 3 ridge lines with gorgeous valleys in-between.  To me the scenery was prettier than the Tail of the Dragon because between the hairpin curves there was a clear view off the mountain.  The Tail of the Dragon has the curves but due to the severity of the curves and frequency you the rider don't have time to take a look, if you going to keep your ass off the pavement.  We had a great ride that took us until 1:30 so we had lunch at a local pizza place.  Ray was going on to Chicago and I was heading back to Cary.  I did part of the Claw of the Dragon back to the interstate and Ray headed off to West Virginia and beyond.  My return was uneventful but I still kept away from major highways.  Coming down the mountain near Winston again the temperature was near 95 and brutal.  I stopped frequently, at least every hour for a bottle of water and a snack and that serves me well.  All told a success and now I can plan for Petoskey!