With the camping trip building up my confidence that I could handle the MC again and that I was comfortable doing trips I set about planning the trip to Petoskey, Mi for the RA Rally.  This trip would be about 1900 miles.  I discussed this with my friend Ray and he said he would be glad to go with me so that made me feel better about the trip and the possibility that I could get into some trouble health wise.  The route was pretty straight forward until... Ray put the finishing touches on a new improved route which would add more local color and scenery.  It was still the same route but more 2 lane country roads. 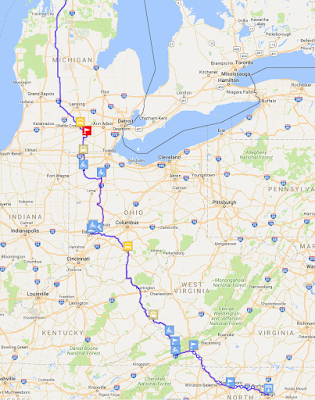 The route was pretty clear until I77 &I64 crossed in Va.  By the time we were to leave we were up to 5 people riding.  3 wanted to take off to do the Back of the Dragon and 2 of us had done that and wanted to get the longest day behind us.  Pete and I took the fast route to Chillicothe, OH and Ray, Tom and Matt took the 2-lane route over the Dragon and on bypassing the interstate roads and making it a very long day.  We left our meet up place in Greensboro at 9:30 and Pete and I made it to Chillicothe by 4:30, a good days ride.  Group of 3 made it to the hotel as dark was on us around 7:30.  Pete and I had already settled in after a nice steak dinner and the Best Western was our home for the night.  The following morning Pete announced that due to his back problems he was turning back so we lost one.

The following morning we gathered up early to leave for Dayton and the Air Force Museum.  There were some good stories from the adventurous 3 and they really enjoyed their route through the mountains.

We arrived at 9:30 am at the museum and we planned on spending no more than 2 hours, after all it was just a museum at Wright-Patterson Air Force Base.  Wow what a surprise at the size and scope of the planes on display in this beautiful facility with the planes arranged by time and geographic deployment.  The planes of WWII were grouped together as was SE Asia, Cold War, and Korean War.  There was a section just for space and rockets.  I spent most of my time looking for the plane that my father was on in WWII, the B-25. 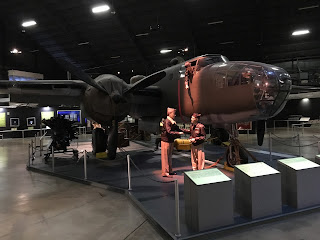 It was shocking to see just how small these planes really were compared to today.  After a while I wondered over to the SE Asia/Vietnam exhibit where i saw the F4 that a member of our group had piloted. Tom Steves was also an instructor as well as serving in 3 combat zones in his Air Force career.  The plane on exhibit still had the pilots name on the side and Tom knew him.  Very lasting recognition.
We had hoped to join up with another group from the Coastal Carolina BMW Riders but they didn't make it before we left for lunch around 12:00.  We had a quick lunch at a local pizza place, keep in mind we didn't have many choices since it was July 4th.

Ray had done the lion's share of the routing with input from Matt, who also knew OH/MI.  We were to take country roads all the way to Jackson, MI.  This was an example of how to take a 5 hour days ride and stretch it into 12 hours.  We were winding around the country at one time coming to a dead end and needing to find a detour around it.

I was beat, that many hours in the heat and sun takes a toll on me.  I have often felt that the amount of hours in the sun/heat was harder on my than the actual miles driven.  We stopped frequently for water and snacks which helped keep the energy up.  So after a very long day but not a lot of miles we arrived Jackson, MI.  Talk about bad roads, I hope I never go into Jackson driving any kind of vehicle again.

The third day was the shortest, only a one state ride up through Michigan.  The scenery changed continually as we went north.  First busy towns, neighborhoods and shopping centers then giving way to more farm land and houses that became cottages and lodges.  At every exit were local farm stands offering local triple washed cherries,  they must have been very dirty.  This was probably my most enjoyable part of the ride up.  We arrived at the fair grounds in Petoskey by early afternoon with plenty of time to set up for the Rally. 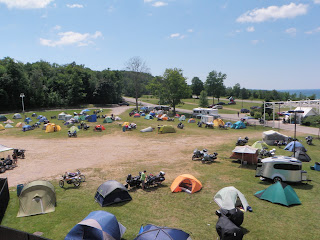 We had great weather for the Rally and I had promised to help with registration as a volunteer which I did for 2 days.  Ray, Tom and Matt helped too but took more time out to do some of the day trips around the area.  I enjoyed watching the GS Giants course in the arena where the GS's ran an obstacle course.  Also the many different kinds of bikes and the people you  meet was well worth it.

The ride home was the fast route mostly interstates and was uneventful, stopping at the same hotels and just getting through the heat of Winston-Salem.  Very good rally and I will go next year when hopefully it will be in Western PA!