It was an early morning.  Up at 5:30 and out checking the tires and oil level.  Once off the ferry I didn’t want to delay the trip to La Crosse.  I had a quick breakfast then off to the dock some 2 miles away. 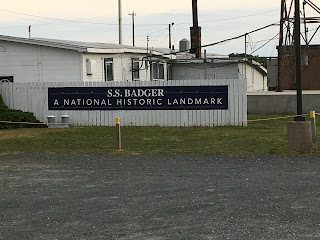 The SS Badger was launched in 1953 and was part of a pair of ships to carry up to 38 railroad cars across the Lake.  The rails are still visible in the bay but filled in.  The ships were also build to be ice breakers on the lake so their mass is significant.  But the years have left their mark.  They are old and the sister ship hasn't sailed in 30 years and is being cannibalized so that the Badger can live on.  This is also very unique since you do not drive your own car on, there is a crew of college kids there to load them.  The bikes of course are loaded by their drivers, oh and yes, the Porsche club of Chicago drove their own cares on...40+ beautiful cars. 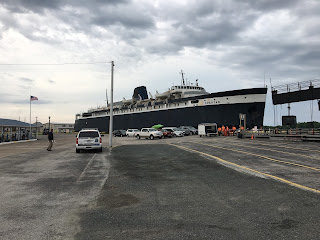 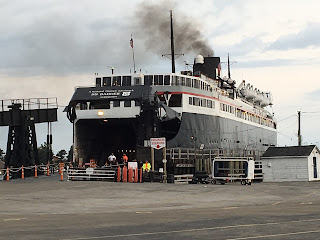 Otherwise it looks like many other ferries except there is a smell of coal burning, not strong but having been the person the loaded our hopper at home as a kid I remember the smell vividly.
Inside the ship there were 3 areas of seating and the outside top where there was seating.  There was also a movie theater and a number of staterooms for those that want to take maximum advantage of the 4 hour cruise.

The motorcycles were the last on and the first off.  We were responsible for tying down our own bikes (I brought my own tie-downs) but it was a very smooth sail across.

From there it was 212 miles across Wisconsin.  Very interesting trip since Wisconsin has interstates, numbered roads, lettered roads and the lowest is double lettered roads.  I started on a pretty 4 lane but not interstate then was directed off onto County road C which was little more than a farm equipment transporting road between farms about as wide as 1 1/2 lanes with no signage.  By now I wasn't any to sure about my Garmin directions but then after 6 miles I took a right on County road A which was a little bigger with lines on the road.  That was most of the trip across until I hit the interstate at 70 mph with significant frost heaves.  Very hard on the back so I was pretty worn out by the time I got to the Radisson Hotel.  I missed one of those once in a lifetime pictures when I saw a beautiful Wisconsin dairy farm with an Amish horse drawn carriage passing in front and in the background behind the farm house was a massive wind generator with the huge sweeping blades.  The first half of the ride was all picture perfect Wisconsin dairy farms then the next 70 miles were fields of Wind turbines all around the farms and finally back to the farms.  Beautiful trip with a mix of old history and new technology.
Posted by John F. Moore\ at 12:24 PM