The ride to lunch on the quick route was about 28 miles but there were other routes prepared that varied from 112 miles to 180 miles.  The goal was to arrive at the venue between 11:00 and 1:00.  I chose the 112 route which was about 3 hours and a beautiful ride through the countryside.  These roads are frequently referred to as the alphabet roads.  Tending to be unlined and interesting motorcycle rides.  To add to the excitement I just missed a picture of a deer with his head sticking out of the high grass on the right.  Luckily when he saw me he ran the other way.  There are deer everywhere here.

Pure Wisconsin dairy farm country.  Very relaxing to travel.  The route was in some cases on the Rustic Roads of Wisconsin....they have a little designation sign.

The goal was lunch at the Vernon Vineyards Winery & Tasting Room.  The Lunch was in the big catering venue on top of the hill overlooking the vineyard. 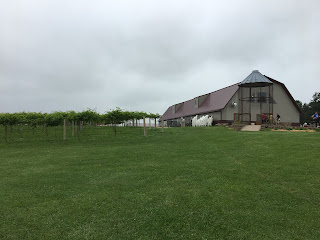 It was a beautiful area and they decorated the "Barn" very nicely for a bunch of bikers! 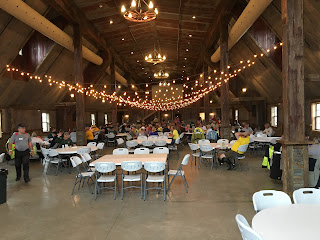 I am pretty sure that most of the 258 attendees rode to lunch but they handled the meal of Pulled Pork, cole slaw, baked beans easily in a buffet format.  It was a fun time!  Then a short 28 mile ride back to the hotel for a relaxing afternoon.  I missed the tour of the S&S Cycle factory but I will catch it tomorrow morning.  S&S makes the Harley look-alike motors for the companies that manufacture choppers....like Orange County Choppers.  Many years ago they made motors for Harley but Harley took that all inhouse.

In case you are wondering...we did not all ride together as a group.  Group sizes were no larger than 8 riders and many people invented their own routes so we ran into each other on the ride but didn't clog up the intersections with a mob scene of bikers. 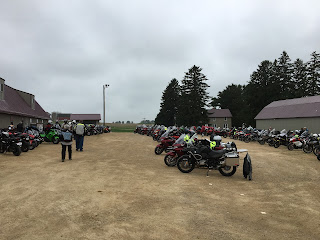 A traffic jam for sure!