What a beautiful day to end the rally!  The sky is clear and the temperature is approaching 80 degrees.  The first thing on the list is to wash the bike and clean all the crud off so the significant reflectors can do there job, making me visible.  The hotel was good enough to provide multiple garden hoses, car washing soap and plenty of towels.  This task is a labor of love and the bikes were lined up so we can all be prepped for departure tomorrow.  I was done in 30 minutes and moved the bike back into the lot to dry.

At 11:00 I left for S&S Motors, the company that built their reputation of after-market parts for Harley-Davidson.  The tour would begin at 1:00 so I would have  time after the 50 mile ride for a little lunch before the tour. 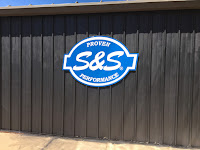 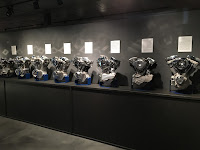 They originally made parts to enhance performance but by the 1990's they were building motors that were setting land speed records.  Clearly, powerful motors.  For many years they held numerous land speed records at the Bonneville Salt Flats.

Their motors are made to slip into the HD frames with no adjustments needed.  They are making a number of things for the Indian Motorcycles like the Flat Track Racing bikes under the name of Indian and have won many events.  I got my hand slapped for trying to take a picture of the bikes being assembled....NO PICTURES!

The museum did allow pictures!

After the death of Mr. Smith, Mrs. Smith ran the company for 11 years and was the heart and sole of it, an avid rider!

They were frequently at the Salt Flats setting records with the various types of motorcycles. 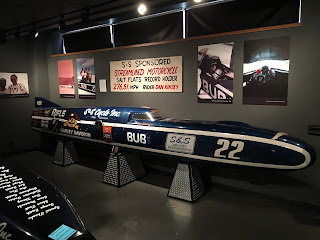 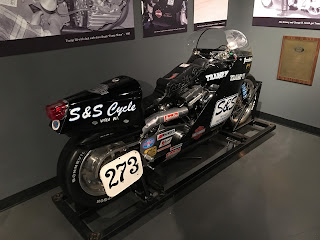 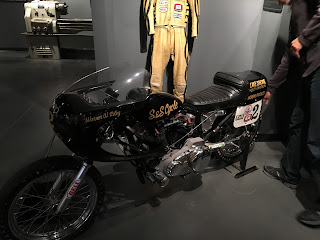 All the above held land speed records.  It was a 1 hour tour and very interesting.

We returned to La Crosse after a spirited ride in time for the evening banquet.  Raffle tickets were drawn and the motorcycle prize winner was a woman and avid rider that everyone knew.  Great ending to the Rally.

Now for the packing and after breakfast I am off in the direction of Denver to pick Pattie up at the airport on Monday.  The weather looks promising to cross the plains and I have some flexibility with the scheduling so I will make a number of stops.  Must get packing.
Posted by John F. Moore\ at 7:59 PM