I left the hotel around 9:30 heading south after 2 hours of waiting for a storm to pass.  It was still hanging around.  When I crossed the Mississippi it started sprinkling.  I pulled over and put on the full rain gear which was a relief since the temperature had fallen to 60 degrees and I was chilly.  As I approached my first stop it really began to rain.  But I have arrived. 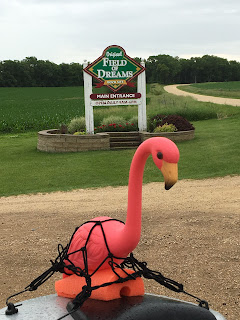 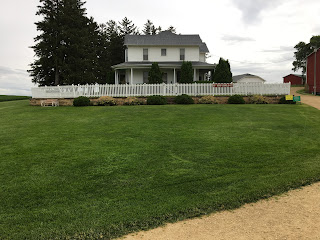 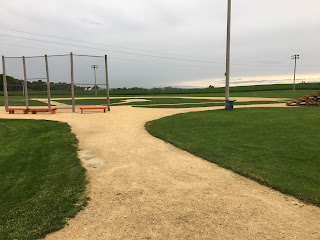 I get chills because that is one of my favorite movies!  I only spent a few minutes there due to the rain but I am glad I stopped.  I went into town for lunch and had a wonderful chicken Pot pie and a salad.

It continued to rain.  It was time to move on or I would end up way behind schedule getting to Denver.   The next stop was only 46 miles away.  The rains came down harder and now gusting winds were beating me to death.  The evening news said the area I was in got 3-6” of rain with 40-50 mph gusts.  I believe it.  I finally got there!  The National Motorcycle Museum with over 400 bikes and dry shelter from the storm. 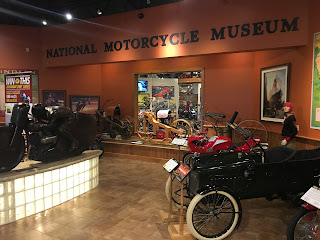 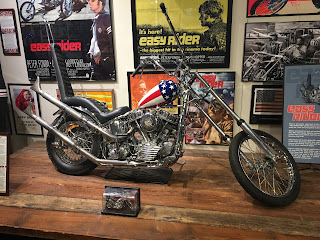 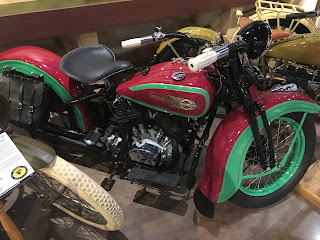 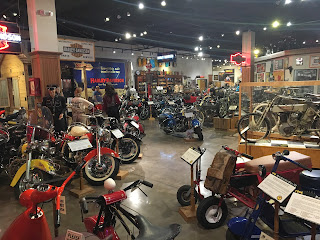 After hours of looking around for a place to stay I saw a sign with an "H" on it meaning hospital but also meaning hospitality like hotels and restaurants.  The town was Iowa Falls ( the place is flat so how can there be falls).  They have Super 8's everywhere in the midwest and this one was across from the hospital.  The town was maybe 6,000 people and had a number of fast foods but I wanted to try a local non-chain. 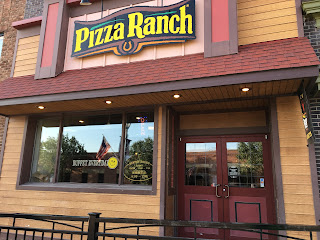 Not a good idea!  The town had 4 pizza places and a McDonalds.  I picked the wrong one.  Pizza was never invented to be served in a buffet.  The fried chicken was good though.  I then rode around the town to see what small town america has to offer.  Beautiful old homes and in the center of town was a nicely cared for park. 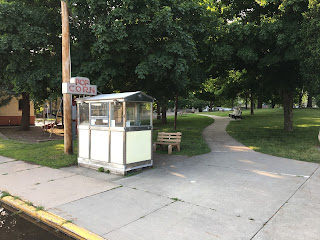 Small town got it right, a popcorn kiosk in the park.  We could all learn from this!  But time for bed since tomorrow will be a 400 mile ride in mid-90's temperatures.
Posted by John F. Moore\ at 8:55 PM