First there was one, then there were two and now we are four!

May 19th, Locust Grove, OK.  At least it wasn't raining yet.  The desk clerk had helped us with the decision to leave the TAT and move on.  Keith suggested that we go into Tulsa and try to get my mirror fixed so a 40 minute ride later and we were there.  The people at BMW were great, giving us water and maps of OK while ordering the part I needed and having it shipped with tires to Colorado for my turn-around to head home.  We also met another John and son Sam from Hilton Head on their way to Alaska doing the TAT first and they had given up on the TAT.  We left and later met up with them at a gas station 40 miles down the road.  After lunch we decided to travel together.   We were headed to Woodward OK.  Like someone that you have seen to much of again the storm clouds were building.  Wow, big time.  Three hours of driving rain, mud washed across the highway, rocks washed out on the road and the temperature was down to 46 degrees.  We were all wet and trembling as we arrived at the Holiday Inn Express.  They had a hot tub!  Within minutes we were in the tub relaxing then....The power lines outside the hottub came down and out went the lights.  We looked out the window and a truck had hit the pole and continued into the ditch next to the hotel.  We ran out to help him and saw the damage.  I guess his accelerator stuck or he missed the brake but he ran by our bikes hitting and totalling 2 trucks and a car while taking out the pole. 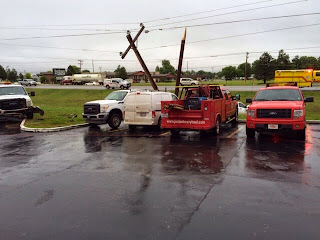 The 2 trucks on the left were severely damaged and the front of a car.  the bikes were fine. 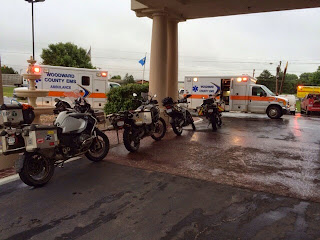 Our fleet of BMW's were ok.  If the desk clert hadn't let us under the awning they would have been gone.  We finally had some good luck.  Maybe we could even see the sun tomorrow, I wonder what it looks like.  I, the optimist, brought sun glasses and sunscreen just in case!