I returned from Pineola to terrible news. Tom Steves died in a motorcycle accident in CO.

Tom had been looking forward to this trip to Colorado renting bikes with his brother for a 2 week ride in the rockies.  He had been doing this yearly the last few years and he told me any number of times how he loved catching up with his brother.   I have been riding with Tom for the last 2 years over a number of trips to Petoskey, the outer banks trip in the spring, back from the MOA rally in Hamburg, NY and to many lunches and dinners.  A truly super individual and you instantly liked him when you met him.  Hard to believe and harder to accept.  We all know that it can happen at any time to us whether in a car or motorcycle.  As we grow older we seem to loose more friends than we make and our universe gets smaller.  I truly miss him and his ever present cup of coffee. 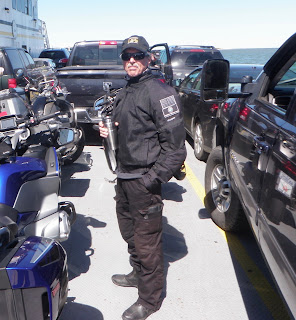 Captain Thomas Willard Steves, 68, of Bunnlevel, NC died August 26, 2017, while on a motorcycle trip in Colorado with his brother Jeff. It was a beautiful day and he was doing what he loved to do, with his favorite motorcycle companion.
He was born to the late John W. and Virginia D. (Hope) Steves, June 16, 1949, in Old Town, Maine. Tom graduated from Harborfields High School in Greenlawn, NY in 1967, received a BS in Aerospace Engineering from the University of Oklahoma in 1973, and an AAS in Forest Management Technology from Wayne Community College in Goldsboro, NC in 1996.
Tom entered the Air Force and went into pilot training in Texas immediately following college graduation. He was an Air Force Captain, F-4 fighter pilot, F-4 instructor pilot, parachutist, and Forward Air Controller (FAC) and extremely proud to serve his country. He worked at many bases in North and South Carolina and Florida throughout his career. Tom was part of several combat operations including Operation Just Cause in Panama and Operation Desert Storm in Iraq. After retiring from the Air Force in 1993 he was a Forest Ranger in Harnett County for the NC Forest Service from 1996-2014. This was a perfect second career since Tom loved nature, being outdoors and working with his hands.
Tom was active in retirement with many organizations in his community. These included the Sandhills Antique Farm Equipment Club, Averasboro Town Restoration Association, Flat Branch Volunteer Fire Department, Counselor for the Veteran’s Court and a volunteer at the “The Greatest Naval Stores Show on Earth”. He was hard-working and dependable (their “go-to” guy) and will be greatly missed.
Tom had a great sense of humor, was unpredictable and a lot of fun. He was always ready for the next adventure. Tom also had a very inquisitive mind. He was engaging yet humble. You always felt when he was listening to you that he was completely interested in your point of view.
Tom’s love for his family and friends was beyond measure. He is survived by his wife, Chaluay and two sons, Johnny and Vittaya of North Carolina; his brother Jeff and his family including wife Diane and nephew and niece Ryan and Nicole of California; his sister Joanne and her family including husband Greg and two nephews Kevin and Cody of Texas; as well as 4 cousins Jannifer O’Connor, Rebecca MacDonald, Melanie Thompson and Caroline Fontaine of Maine. He will also be missed every day by his dog Cooper, who was his constant companion and best friend.