My brother had a condo near Rosemary Beach, Florida for the month of November so I would have a free place to stay if I decided to make the trek.  The fastest route is down I-40 to I-95 to I-10 across Florida.  Talk about a dreadful 675 mile trip.  So I have passed up this invitation the past couple of years because I hate long trips on the interstate system.  But this time I accepted and decided to see small town SC and GA and cut across South Carolina by mostly 2-lane roads.  The only problem that I would have was getting around Columbia.  Columbia has become a sprawling metropolis with no scenic secondary roads to reasonably get around it.  So I made the decision that if I had to do some interstates then I would zip through Columbia to Augusta, GA then get back on secondary roads.  From what I could tell it was a good decision because I would have been in stoplight hell for many hours getting through that town.

The final route looked to be what I enjoy, lots of small towns and some historic sites and I would go by the giant Warner Robins Air Museum, the 3rd largest air and space museum in the world.  Smithsonian is #1 and the British Museum is #2.  So the route was taking shape. 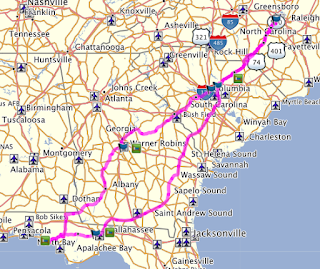 The fastest route by interstate was 675 miles of boredom and this route with only a small section of interstate was about 45 miles longer.  I also made an adjustment to my GPS and that was to restrict the route to no Interstate/Toll roads and the shortest route.  So other than the I-20 segment I was on secondary roads and riding through the center of the towns along the way.    Small town America, here I come.

Launch date was November 6th but do to a clumsy fall on my part I had to wait until the 7th so I could have my iPhone screen replaced which I broke in the parking lot of Target along with scraped knee and bruised ego.

I had debated many time the merits of the summer cloths or 3-season and even electric gear.  I ended up with 3- season and packed my electric jacket and gloves for insurance.  The morning was cool in the low 60's, perfect for a ride.  The highs were expected to be in the upper 70's for much of the next 7 days and no sign of rain anywhere.  The sun was up and at around 8:00 I left on my usual route down route 1 heading to the SC border.  I would take Rt. 1 down to Camden through many small towns that had seen better days.  Gone is the Tobacco and textile mills.  The small towns that grew wealthy from them now were very sad.  Empty mills, and factories dotted the countryside.  The crop most visible was cotton, now a major crop for SC.  Around 10:30 I stopped in a small town for gas and asked the attendant where I could get something to eat.  Her response stunned me "there are no restaurants around here, you will have to go another 20 miles before you will see something."  Most of the town was boarded up and an old factory, easily 1/4 mile long had vines growing over it.  This scene seemed to be repeated over and over in the eastern half of SC.  I finally found a Burger King and had some brunch, my last stop before I-20 to Augusta.  What can I say about I-20....nothng.
I got to Augusta in the early afternoon and got back on the secondary roads.  The road to Macon GA was more like a divided 4 lane but had occasional stoplights and a number of service roads tied into it.
My goal for the first day was to get south of Macon and stay near Warner Robins Air Force Base.  The Museum was a major stop for my trip.  I had gone 400 miles and was nearing Warner Robins so I started looking for a hotel.  I couldn't find one!  So finally I asked at a hardware store and I was one street away from the strip that exists next to all major military bases.  The Best Western was good enough and there was a steak house next to it.  It was now about 6:00 pm and I was hungary and a bit tired so I got cleaned up and headed next door for a steak.  I had traveled a bit more than I had expected so I was feeling really good about the next morning and days ride.

I like Best Westerns since they usually let me park the bike under the lobby awning where the security cameras have the best angle and there is always a person at the desk.  I sleep much better when I think the bike will be there in the morning.  Breakfast at the hotel was like most but I am happy with a yogurt and oatmeal.  I was all packed up by 8:00 but the museum didn't open until 9:00 so I enjoyed another cup of coffee.

I arrived at the museum 15 minutes before opening but they didn't care and let me in.  I was the only one there. 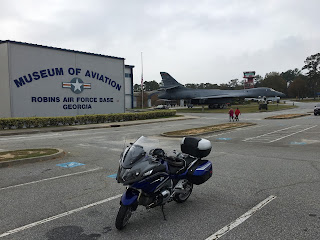 The museum was huge.  5+ buildings spread over  a campus like environment with planes on the lawns as well.  When I entered I took off my riding clothes and put on tennis shoes so I could cover come ground.  This place is definitely a destination stop!  I was all alone for a couple of hours looking at the various pieces of history.

I even found a B-25 like the one my father was a gunner/armorer on in North Africa, India, and China.

There were many planes both familiar and planes I had never seen before. 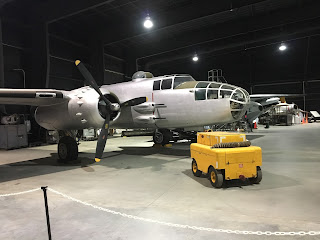 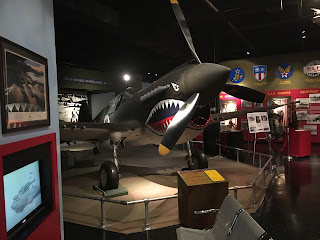 I could easily have spent 2-3 days just wandering through the various exhibits and buildings and I didn't even get to the outdoor planes on the lawns.  I will be back but for now I must move on with 325 miles to go to the final destination.

The ride on down toward Panama Beach was a beautiful 2 lane 55 mph road.  It is interesting that for the most part there was do traffic on these roads but I did have to pay attention to the speed limits because the small towns tended to have speed traps as you approached because the speed would drop from 55 down to 35 very quickly.

I did pass buy one National Park at Andersonville.  This is the site of the confederate army prison where many prisoners starved to death.  It is a terrible piece of history and as you ride into the area you can feel it. 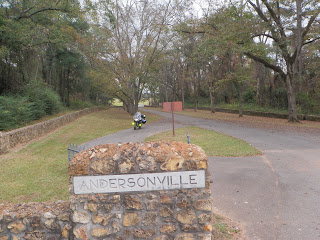 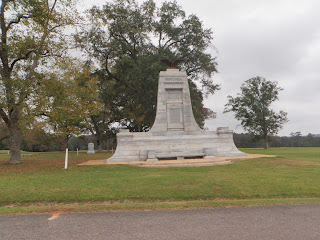 The markers were from the various northern states whose soldiers died here.  The cemetery is there but the actual prison is long gone.  The view of the countryside is beautiful.

The small towns here near Macon, GA looked prosperous and well kept with people actively putting up Christmas decorations. Some were really creative. 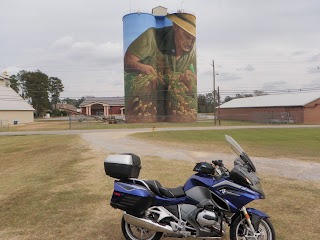 Then again the cotton fields were everywhere.  I stopped to drive into a cotton field to get a good picture of the bike in the field but once in there I found out that cotton grows in real sandy soil and there was no way to park the bike to get a picture.  It was also difficult to turn the bike around since I had no traction. 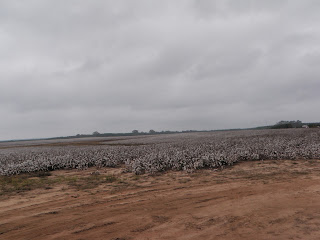 As you get into Georgia you see more and more pecan groves, old growth and new growth.  And then you arrive at the coast. 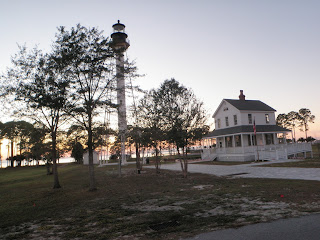 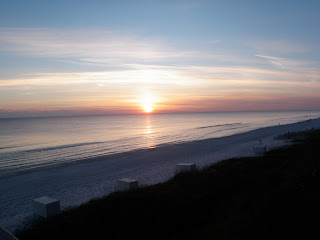 The sand was so white that the glare was a killer, requiring sunglasses all the time.  Beautiful!

On Saturday, November 11th my brother and his wife took me to the Pensacola Air Station for the final show of the year of the Blue Angels.  Probably 30,000 people there and a very big show. 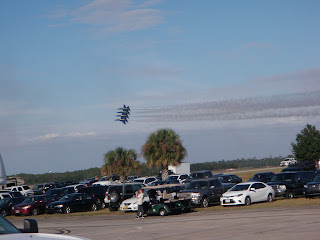 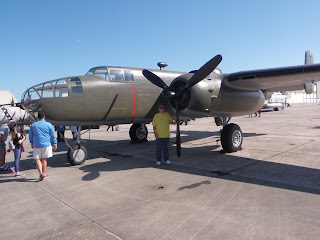 This B-25 was owned and piloted by a WWII vet that was a pilot on the B-17's that bombed Germany.  He rebuild this B-25 on exhibit at the air show.

On November 13th I left for home after many meals of oysters, shrimp and beer.  What a great week.

The road home went straight east above Panama City and riding straight into Tallahassee and the Florida State Campus.  This is the only large town I would see on the way home.  I planned on getting to the border of South Carolina that evening and as I continued through the countryside the temperature, which had been in the 70's-80's dropped into the low 50's and at around 6:00 I ended up in the small town of Sylvania, GA.  I stopped for gas and asked the attendant where the nearest nice motel could be found.  She said I had to go another 30 miles or stay there in the strip motels.  How bad could it be?  Well, I should have driven the 30 miles, what a dump with stains all over the rug and plaster falling off the walls and the bathroom was nasty.  This is where I say at least know who slept in my tent.  The room was $35 and wasn't worth that.  I got up 3 times to check on my bike and could hear crawling things all night so I was out of there early.

When I packed I was so proud of the fact that I brought my electric gear and it was 40 degrees outside.  Then I found out I didn't bring the correct plug for the bike.  It warmed up to 50 by 10 o'clock and I was chilled but fine for the remainder of the trip.

The route home through SC was up Rt. 301 to 601 to Rt.1 which appears to be the route that trucking used prior to I-95.  There were many deserted motels, gas stations and some major truck stops with ivy growing over them.  It was a big 4 lane from small town to small town with no traffic and few options to eat or get gas.  The empty factories was all over the countryside and you could feel how economically depressed the eastern part of the state had become by being by-passed by I-95 and the loss of the factories and traffic.  It was definitely eye opening.  A great trip and lots to learn about the neighboring states.  I will have to plot a different route next year and bring the right plug for my jacket and gloves.