Another great winter day with the temperatures in the 60's and a mission to go to the oyster roast!  I took the quick route to Wilmington and enjoyed the Satellite Radio on the RT while cruising with cruise control on.  It was a nice ride down and it gave me time to experiment with the gadgets on the bike like the radio which is very complex and i probably shouldn't have been messing with it while cruising.  Little to no traffic and I arrived early enough to check into the Days Inn on the beach, winter rates are very reasonable, with boardwalk construction all around it and no access to the beach.  Oh well, I was there for an Oyster Roast so let's get with it.
I was new to joining this group but I knew a few of the members and they had a good crowd with homemade clam chowder and 3-4 bushels of Oysters plus many sides.  It is a shame I don't drink beer when I am riding because it was a beer drinkers paradise. 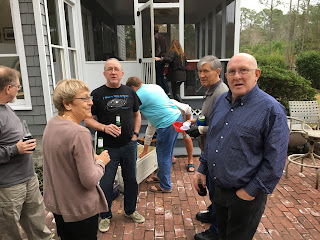 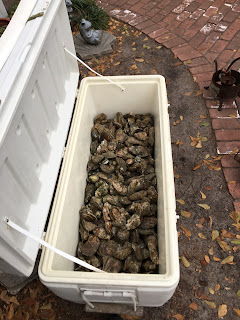 The food and company was great and the club was very welcoming.  I spent 4 hours there and headed back to the motel for a good nights sleep.  Morning came with rain that was expected but was rather heavy.  I really don't mind riding in the rain if I have my gear with me.  I was well prepared and left around 10:30 when the rain let up a bit.  I made the trip back in 2 1/2 hrs but along the way there was that rear wheel drag that I had experienced before.BUT THEY JUST FIXED IT!
Posted by John F. Moore\ at 11:13 AM