It was a tough winter!  Usually I don't winterize my bikes because I ride year round.  At Thanksgiving I decided to put the bikes up and winterize them since the prior winter was very warm and I rode all winter.  I felt that the odds were against me to have another very mild winter.  It is a good thing...we were hit with a very cold winter setting records for the number of days when the temperature didn't rise above freezing.  I really didn't touch a bike until March when I started the process of riding each bike until i had burned the stabilized gas out and replaced it.  So when April came about I was ready of a trip.

A couple of us had talked about a Tarheel Travelers club ride remembering Tom Steves that we lost in an accident in Colorado last August.  Some of us had covered many miles with Tom the previous
three years and really wanted to do this ride.  So on Saturday, April 21st at 10:15 it was kick stands up in the town of Smithfield where we had the monthly Travelers meeting and headed to the Outer Banks.  The first leg of the route was to Washington NC for lunch at Bill's Hotdog stand.  The roads there were for the most part 2 lane country roads that most of the six of us had been on many times before.  The weather was perfect, starting a little cool in the high 50's then ending up in the high 70's. 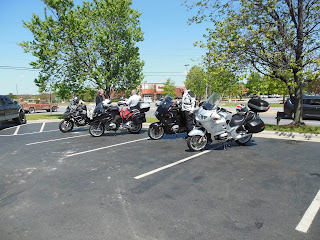 We weren't the only ones to arrive in Washington...the NC bicycling club had staked out the downtown with what looked like 1000 riders and were lined up at the eateries.  The group was laid back and we enjoyed watching and once we had our hotdogs we sat on a brick wall and enjoyed the beautiful weather.

The road from Washington back to Rt. 64 near the bridges to the outer banks was an area most of us had never seen.  This road, Rt. 264 took us around the eastern tip of NC facing the sound and the outer banks on the eastern side.  It was beautiful 2 lane roads the ran through farm country with very few towns.  The water table was very high with water right up to the side of the road on both sides then a huge expanse of farm land.  We were right on the edge of the Pamlico Sound going through the Alligator Rover National Wildlife area.  We passed just off of Mattamuskeet then rode through Stumpy Point.  Again the skies were clear and the temperature was in the high 60's with some of us worrying about it getting cooler as we approached the Atlantic.

We were right on schedule for an arrival time around 4:30 at the Comfort Inn in Kill Devil Hills, on the beach.  The restaurant was literally across the street from the hotel, Millers Seafood and Steak House.  Since most of us refuse to ride the bikes after having a drink this was a great solution.  Most retired early due to the early launch in the AM.  The temperature had fallen gradually to what was probably the low 50's but still a beautiful sky.

We arose to some bad news!  Our route was to take us down to Ocracoke then we would take the ferry to Cedar Island and return via Rt. 70.  But when I called the ferry to secure passage for 6 motorcycles the were booked for the whole day.  We weren't going home that way.  Not a grumble from the group at breakfast, we would just take a different route.  We decided to see Bodie Island Lighthouse then go the the Hatteras Island Lighthouse.  We would then need to backtrack 60 miles back up the Outer Banks to take Rt. 64 home.  Everyone was onboard. 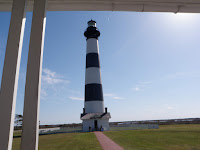 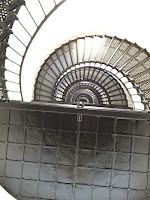 Bodie Island Lighthouse is equally impressive to the Hatteras Lighthouse which is a little taller.  We got there at opening time and the Forest Service personnel were wonderful at the history of the lighthouse.

We spent probably 1 hour there walking the grounds and visiting the gift shop.  Everyone grumbled a bit about the charge to climb the stairs since all of us were wearing safety gear and boots.   It did look challenging. 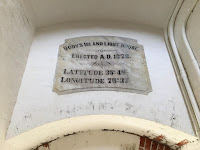 We took a leisurely pace down Rt. 12 for the 40 miles to Hatteras Lighthouse.  The coastal scenery was beautiful and at time the water was close on either side of the road.  You could easily see where storms had damaged the sand berms and the roadway had been patched many times.  If a Nor'Easter comes through then Rt. 12 is closed while the highway department clears the roads.


Hatteras Lighthouse is taller and seems to have more history since some years ago it had to me moved away from the shoreline.  This was a multi-year undertaking to jack this thing up and move it by rails away from the ocean.  The museum was great with the details of the move.  Once again 6 riders sat around grumbling about the idea of climbing the lighthouse but there were no takers.  After 90 minutes we loaded up to find lunch. 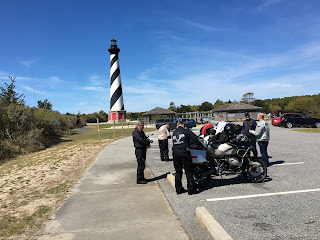 We stopped at Burger Burger for lunch and decided to book it after lunch heading home since some of us were going as far a Greensboro and none wanted to be riding after dark.  We were heading home around 2:00 and were making great time on a very low volume day traffic wise when Ray, the leader at the time, starts flailing
his arms and pointing.  As we got further down the road we had to stop at a construction site and he explained that it was a real alligator on the side of the road.  I guess he didn't believe me when we discussed this on the ride out.  I asked why he didn't stop for  a picture and he explained that there was no fence between him and the creature.  Fair enough!

I was a fun trip and we did get to tell lots of stories about Tom and his ever present coffee mug.  He is clearly missed by all of us.  Next year hopefully we won't have a memorial ride but just a spring fling somewhere!