I got up at 3:30 am pretty awake and had a couple of cups of coffee in the lobby.  No food was available.  At 4:00 I left on I-25 south.  I stayed 5-10 mph below the 70-75 mph speed limit and decided to follow a big loaded truck at some distance so I would have time to react if he hit something and it popped out in front of me.  We started the climb of Rotan Pass and it was in the high 50’s, chilly but not painful.  The truck kept slowing down to about 35 mph so I passed him.  As I approached the top of the pass my speed picked up and I was doing 60 pretty fast on the downhill.  I have always been told that my amber running lights would help me see animals around the road but I hadn’t tested it.  I rounded the curve at the top and a candle was all you needed to see 3 big bucks, 2 in the passing lane and one in the thru lane and I was clearly unable to stop!  I have always been told to aim at their ass since they typically don’t back up....but out of 3 which do I target?  I left the two on the left and aimed just right. (being on the yellow line) left of the single deer.  I pulled in the clutch to let the motor idle quietly, hoping not to spook them and shot past at 55 mph.  I was so close to the one on the right that I could have slapped him on the butt!  To say I was a bit tense is an understatement!  I glanced into my rear view mirror and I don’t know if they knew what happened.   I flashed all my lights on full power hoping to warn the loaded tractor trailer behind me.  I believe he must have hit them because he was 1/10 of a mile behind me and I slowed down but he didn’t follow.  The road was divided so I couldn’t turn around.  Maybe he saw my flickering lights and managed to slow down.  It was a very big tractor trailer with a huge load so I am sure the driver was ok but it would be quite a mess.  Maybe damage the radiator.  Not much I could do at this  point so I proceeded on down the road.

Around 9:00 it was 72 degrees and at 10:00 up to 85.  It felt great with the sun up and better vision of the surrounding area.  My good friend, Ray Hunting, let me know that I was passing by the Cadillac Ranch so I put it in the GPS and made the stop.  After all I had been to Carhenge, why not? 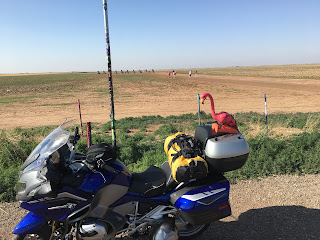 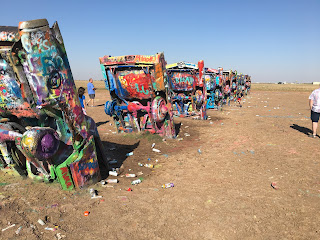 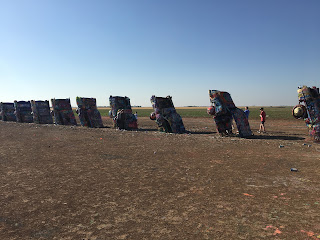 I was sorry they left all the empty spray cans all around but the artist that created this felt that it was also part of the art!  I don’t think so!

I rolled into Childress at noon as I planned and checked into the Quality Inn.  The temperature was 93 degrees and I need to rest.  What a day!